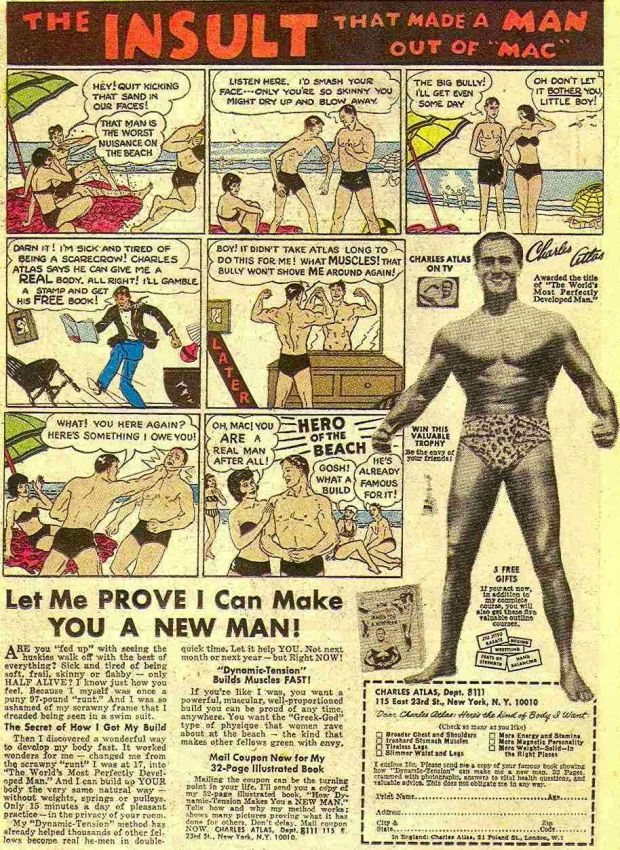 I am the 97 pound weakling, perhaps not the original, but I have always been super scrawny. Like the kid in the Charles Atlas ads that peppered the back pages of comic books for decades, I am a skinny. Even when my weight topped 240, I was a slight man under a concealing layer of flab. Peel away the spongy exterior and you find a pale, stickboy suitable for ass kicking. As a kid I dreaded the beach and wore long pants and long-sleeved shirts to conceal my scarecrow body.

While I have gone on to become a strong swimmer, cyclist and runner, I never have been able to put together a weightlifting program for any consistent period of time. I can run a marathon, but I can’t do a pull-up. I’ve cycled 150 miles in one day, but I have never been able to lift much more than baby weights. I have mastered cardio, but success with adding muscle has always eluded me.

Yes, I have tried many times over the years. From weight training classes in high school to sporadically working with a trainer over the last year, I have set my sights on the weight room, but the treadmills and spinning classes have called my name. As a kid I even bought a Bullworker thinking that might help me turn it all around. It ended badly with the spring-loaded apparatus breaking during an exercise involving a door jamb. Before I could react, the fist-like end drove into my chest knocking me to the floor. That was the end of the Bullworker as well as a spirited three weeks of bodybuilding.

Over the last few years I’ve gotten back into shape, challenging myself to dozens of road and trail races. After a half decade of sedentary middle age I am feeling pretty good about my fitness. I set ambitious goals and have been able to accomplish them with a little hard work.

I noticed this past year that my race paces were increasing instead of decreasing. How could I be running more yet slowing down? Perhaps it was middle age, but I suspected an overindulgence in bagels and pizza played a role. It had been months since I weighed in so I stepped on the scale. Ooof! I rocked that bad boy at 238 pounds. My suspicions were correct and I opted to try Weight Watchers. It has been several months of fruit, vegetables and a constant gnawing hunger, but I have dropped 45 pounds. For the first time in nearly a decade I am under 200 and my running feels better than it has in years.

This very welcome weight loss has revealed a skeleton in the closet. That skeleton is me. It is wonderful to see my bones, but I wish they weren’t so damn bony. The 97 pound weakling is back!

Can a slight man well into middle age get results from a weight training program? That is my 2017 goal.

It doesn’t help that I HATE lifting weights. It’s boring, it hurts and doesn’t offer the same endorphin rush and head clearing bliss as a five mile run along the waterfront. I’ve managed to put together a decent program for a few weeks at a time, but soon dread the workout and opt to do cardio instead.

My hope is this time it will be different.

My targets are simple. I want to maintain roughly the same weight, build some muscle and bang out 100 push-ups and 12 pull-ups without stopping. I can struggle through 45 pushups now and the pullups aren’t happening at all. I’ve got one year to get there.

How will I make it happen? My plan is to lift three times per week. I’ve got a trainer who will love seeing me concentrate more on weights. He isn’t a fan of all my sissy running. I hope to work with him a couple of times per month and find some lifting pals so all the big guys on the gym floor won’t beat me up.

Two things will help me build momentum. One, I am going to set clear goals every week and evaluate my progress. Second, I am going public with my goal and hoping friends and colleagues will keep me honest and cheer me along.

This goal went in effect today, January 1. I will document my workouts as I go and write an update every month. I won’t horrify you with the before pictures. Let’s hope I have something to show by the end of 2017. Wish me luck and I will see you at the gym