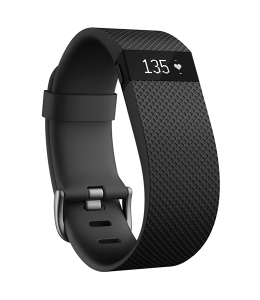 Two weeks ago I chronicled the sad, but long expected demise of my Nike FuelBand (Fuelband #4 to be exact). It was a poorly made wearable with limited capabilities. Over time I learned to accept my Fuel Points and use the data as a barometer for my general state of fitness. If I made my goal, I knew I had moved just enough for one day. It motivated me to get up, get out and get going.

When FuelBand 4 succumbed to the ravages of time, I opted for a Fitbit Charge HR. I needed something to get me moving, keep me motivated and give me the numbers. How many steps? How far did I go? How long did I run? I need to know.

Ten days ago the Fitbit arrived in the mail and I set it up quickly. I downloaded the complementary app. WIthin a few minutes I was out on my first run. While it’s only been a week and a half, I am very satisfied and thrilled that I moved on from my crumbling relationship with FuelBand.

Here’s a quick snapshot of what the Fitbit Charge HR tracks; steps, calories, distance, heart rate, sleep, flights of stairs climbed. It buzzes when I reach 10,000 steps. It’s a damn decent watch as well. Hell, it even syncs with my phone and buzzes when I get a phone call

The display is clean and easy to read except in bright sunlight. One click tells time, two steps, three heart rate, four distance, five calories burned and six flights of stairs climbed. I like that time is the first display. It works as a watch and it works as a fitness tracker. FuelBand required four clicks just to get to the time. It fits and adjusts like a watch too. The FuelBand was always a bit clunky with its hard casing. While I got used to it, I immediately liked the feel of the Fitbit.

Maybe the biggest thing is NO Fuel Points! Plus, it seems relatively accurate. Fuel Points always seemed arbitrary, often adding up more when I was driving than when I was actually walking. However, I had become accustomed to them and trying to meet or exceed my goal of 3000 per day had become a daily habit. Saying goodbye was very easy.

Steps vs points makes more sense and speaks a language I understand. 10,000 steps is a broadly accepted standard for moving enough every day. The first time it buzzed at 10K I was a bit shocked, but now I look forward to meeting that goal. 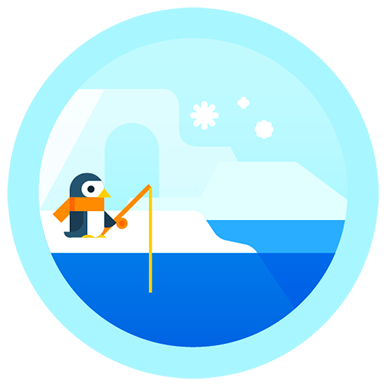 The Nike Fuel app was never my favorite. It took forever to sync and didn’t tell me much. I did like the simplicity, but Fitbit works faster and better. I thought I would miss the gimmicky FuelPoint badges, but NOPE, Fibit even has gimmicky badges too! 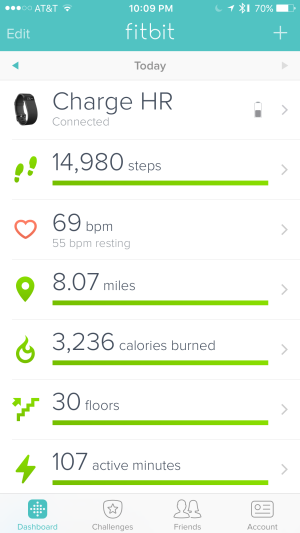 The Fitbit app is loaded with features, but is still simple and easy to use. It syncs almost instantly through bluetooth and offers an abundance of data right on the homescreen. Steps. Heartrate. Distance. Calories burned. Flights of stairs. Active minutes. Amount of sleep the night before. Plus it allows you to track exercise, log the water you’ve had to drink and number of calories you’ve eaten. You can even set up a food plan. 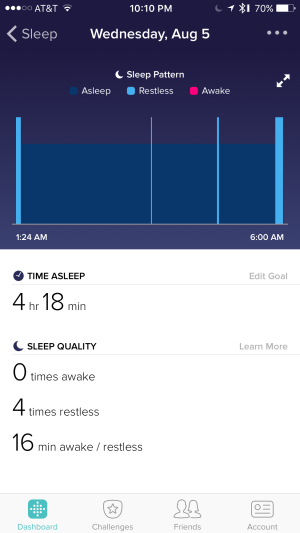 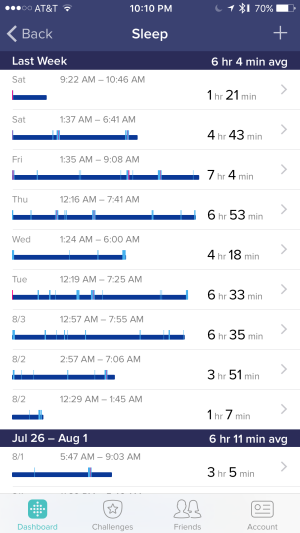 My favorite and most insightful feature has been the sleep tracker. Not only does it show how many hours you’ve slept, but also indicates how long your sleep was restless and how long you were awake during the night. What is shocking is how little I actually sleep. I knew I didn’t get enough rest, but my estimation of 6 1/2 hours per night was off. I am averaging less than 6 hours per night. Through Fitbit I’ve set a goal of 7:15 per night. 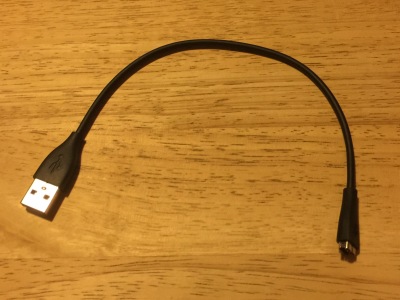 I will lose you, but I will always have this picture

1 The Fitbit needs to be charged every 3 or 4 days. It says 5, but the warnings come early. Charging isn’t hard, it’s just annoying.

2 The USB charging cable is tiny. WHen i lose this, I hope a new one isn’t too expensive.

3 The plastic face scratches easily. I’ve already got a tiny scuff and i know there are more to come.

What happens over the next few months will be the real proof. I went through 4 FuelBands in less than three years. They broke, died and went haywire in rapid succession. Can the Fitbit Charge HR stand up to 24/7 wear and tear and keep going? Stay tuned.

Tell me about your favorite fitness trackers, apps and wearables.

Last Friday I received an email with the subject line, “Legal Notice – Nike+ FuelBand Settlement.” It further went on to say that Nike and Apple “engaged in violations of consumer protection laws and warranty obligations in connection with the Nike+ FuelBand. Nike and Apple deny Plaintiff’s allegations and deny that they did anything wrong. The Court has not decided who is right.”

The key takeaway is as a FuelBand purchaser I am eligible to a $15 refund or $25 gift card from Nike. As if on cue my FuelBand died the next morning. It stopped holding a charge. Dead. I brought it into NikeTown. They tried to charge it up. Nothing. I filed my claim and tonight I tossed the FuelBand and its box. It was the quiet end to a 3 year saga of a should-have-been-better product that overpromised and underdelivered. 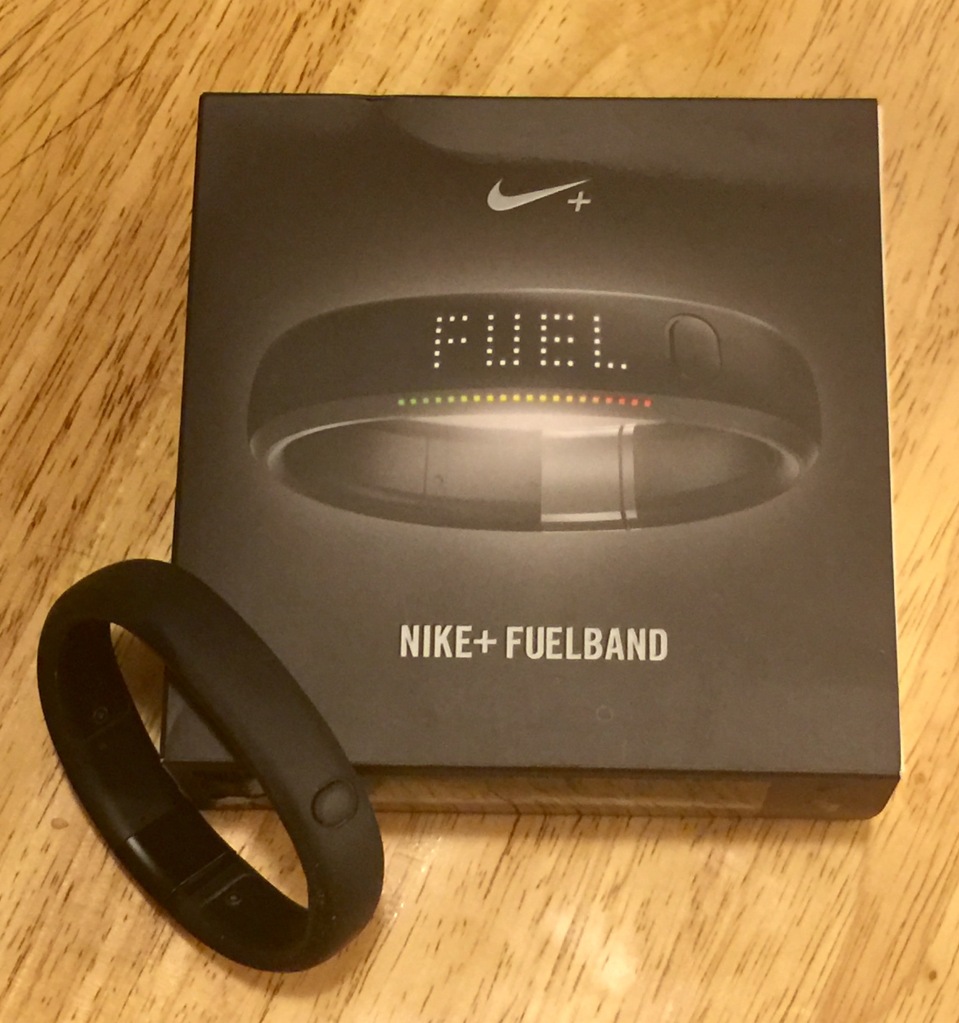 I got my first FuelBand a few months into the early hype. All the cool kids had them and it seemed everyone else wanted one. It looked pretty sharp and it was the next generation of fitness tracking. I had to have it.

First, let’s step back to the dark ages. I tracked my workouts long before there were apps, GPS and wearables. It was simple. I used a sports watch and wrote my results in a composition notebook. It was important to see how long I ran, how far I biked and if I improved. I even tracked how much time I actually spent skiing in an eight hour day on the slopes (it’s about two hours, kids). The data was valuable in many ways. I could train smarter and get better results by keeping good records of every workout.

Now, some would ask why I even need a wearable at all when I can use any of dozens of running and fitness tracking apps on my phone. Well, I used to wear my a fitness armband with my old phone, but the iPhone 6+ would be something akin to strapping a cookie sheet or personal pan pizza to my arm. I saw someone running with one tonight and it looked silly. Plus, I love the minimalism of running. Shoes, shorts, shirt and socks. A fitness tracker on my wrist keeps it simple.

Once I got my FuelBand I was puzzled about Fuel Points. What did they mean and how much exertion would it require to earn them? I would often earn more points driving my kid to school than I would on a three mile walk. Biking didn’t seem to earn that many either. The only real high scorer was running. However, I accepted the opaque and arbitrary Fuel Point and settled on getting 3000 a day. If I succeeded it signaled to me that I wasn’t just a waste of flesh, fat and bones. I had done something.

However, the real problem with the FuelBand was simple. It was poorly made. My first band broke down within a few months. Nike gladly replaced it. Number two last for an even shorter period. Replaced again. Three made it nine months. Replaced. Four managed to hang on long enough to hear the class-action judgment and shuffled off its electronic coil. My kids’ goldfish lasted longer. They fell apart, they stopped holding a charge, they just died.

The folks at Nike were always helpful and swapped them out without hassle, but you always got the feeling they knew it was a crappy product. My forthcoming $25 gift card bears out my suspicion.

So today as I mourn FuelBand IV I ponder our legacy of three years together. What kind of elegy can I compose over a poorly made piece of dead electronics? I will keep it short and mostly sentiment free.

FuelBand, you and your 3 older brothers served me adequately for the past three years. You tracked my movement and let me know whether I had completely wasted my day. You were too fragile for this harsh world. We didn’t share the same language. I talked in distance, time and calories burned. You spoke in FuelPoints. We may never have entirely understood one another, but we made it work. May you rust quickly in the great landfill in the sky. I won’t miss your poor syncing abilities, but I will cherish my 3,000,000 FuelPoints. Farewell, old chum.

So Much Promise, But Will It Deliver?

As I pitched my FuelBand IV, I was busy setting up my new Fitbit Charge HR. Once NikeTown confirmed that FB4 was indeed dead, I ordered a new wearable. Five days of data will go untracked, lost forever, but I go forward knowing that I have taken 55 steps since midnight, my heart rate is 64 and in 26 minutes I’ve burned 46 calories.

Goodbye and Godspeed FuelBand. Hello Fitbit. Let’s get to tracking.