Let’s talk about Spotify Running. About a month ago Spotify announced a new musical experience specifically designed for runners (all part of a larger fitness initiative). They created non-stop soundtracks that use your smartphone’s accelerometer to determine your tempo and provide the perfect beat to match your stride. The desired effect is a motivated runner pumped by the magic of music.

First of all, I don’t generally run with music when running outside. Running is all about simplicity for me. All I need is shorts, shoes, shirt and socks. It is my legs against the distance. II don’t want distractions and crap to carry. I want to hear the cars, the birds, the breeze and the sounds around me. It isn’t about creating a “portable interior” so wonderfully described here by Maria Popova, it is getting out of the car, bus and office and being outside.

However, when it is treadmill at the gym time, bring on the music. I want to while away the tedium with loud, motivating music. I’ve already created a ton of my own mixes on Spotify that can carry me through a four or five mile stationary jaunt so Spotify Running needs to be as good or better. Time to put it to the test.

BURN is the first original, composed and recorded by Dutch DJ Tiësto. Spotify describes the track as “massive running beats.” It is definitely the best of the originals with a propulsive club beat that immediately jolted my pace. Like any faceless dance music that kicks ass in spinning class or on the dance floor BURN was magic for seven or eight minutes and I got bored. Like really bored. Soon it feels like and endless loop trapping everyone in the club for an eternity.

Next up is EPIC, listed as “powerful cinematic music.” The dip in quality from our friend Tiësto’s track is significant. This track is the music playing in a generic action film as the squad silently moves in and prepares for the explosive third act. It is dark, propulsive and has all the charm of needle-drop music which is my main issue with all the Running Originals. They have the beat to keep you moving, but they don’t have the personality to keep you interested. Once again, I switched to a new track after about a mile. 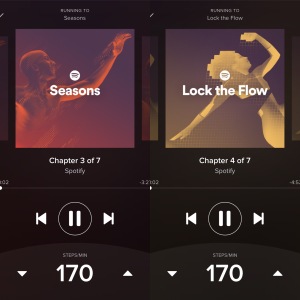 SEASONS is “orchestral music at your pace” which begins with a plaintive, but insistent piano supported by strings, woodwinds and percussion. The sweeping minor keys rise to big crescendos and fall to quiet moments of sad contemplation. This track raises another issue for me. You’re stuck in the mix you chose unless you awkwardly open the app on the run and switch to another original. SEASONS is a bit of a downer and there’s no way I could run with this as a backdrop for more than about five minutes. It would be a great to mix and match the originals to give some dynamic to the run rather than one mood fits all.

Then we dip into LOCK THE FLOW a slightly beefier take on The Postal Service’s “Such Great Heights.” The “shimmering electronic beats” offer up the second best original mix and I could actually see myself giving this one another shot. It’s got a great beat and you can dance to it, but also has some nice subtleties and range that make for interesting listening.

“Happy, blissed out pop and indie” reads the description for BLISSED OUT. Again this is largely anonymous light EDM that pumps along at a nice click, but doesn’t go anywhere. The guitars and drums on Chapters 4 and 5 are a nice change up, but the mix lost me long before.

The final original beckons you to “step into an action movie.” THE CHASE is the weakest of the whole bunch. Dark, foreboding and just really boring, this one is the most generic of the bunch. It feels familiar in mediocre action film way. Once again it has all the right features, but none of the heart and soul of real music.

The Running Playlists are fascinatingly random, but also pretty adventurous. There are plenty of familiar bands mixed and matched with a lot of lesser known undergound and indie artists. Right now it offers thirteen mixes to choose from and the range of styles is broad and deep. Hip hop, rock, country, metal, electronic, indie and oldies are just a sample of the variety. The tracks rip along at running tempo and provide a great musical score for a quick run or long haul.

Overall, I am impressed by the effort. Spotify clearly had runners in mind when they commissioned the originals. As mentioned above I want to mix and match the Running Originals to give my running soundtrack a deeper, broader and less monotonous dynamic. The interface is clean and easy to use with the exception of changing the music on the go. If this is just the beginning I am excited to see where they take it.

Has anyone else tried Spotify Running? I would love to hear your thoughts.